How can we capture an element of our identity in just six words?

Legend has it that when Ernest Hemingway was challenged to write a six-word novel, he came up with,
“For Sale: baby shoes, never worn.”

Inspired by Hemingway’s short story, SMITH magazine launched online in 2006. They challenged readers and famous writers alike to submit their own six- word memoirs for a contest. People of all ages sent in short life stories in droves, and the results were poignant, hilarious, devastating and good lessons to all. (Smith Magazine)

6 Word Memoir...Phases of the Writing Process
*The writing process is recursive (repetitive) you may be at any phase at any time it doesn't always go along the same path (brainstorm-draft-revise-edit) like we may have practiced when we were younger

Study The Genre
Figure out what a six word memoir is, anyway. What makes a strong 6 word memoir?
What do you notice about this genre's CONTENT and STRUCTURE?

Try a few out quickly- just see what happens! Then it’s a good idea to take step back and brainstorm: consider what you want to communicate about yourself- is it that you are thoughtful? An activist? Athlete?  If I were to write about being a soccer player I would try to communicate how that feels, so my six word memoir about soccer might be, “Most alive on the soccer field.”  Some students like to make a list of their characteristics or beliefs they are trying to get across.  Here’s one way you could brainstorm

Drafting: Try it Out!

Now that you have some thoughts about who you are, try to communicate that in a single sentence.  DON'T count words yet! Write a whole bunch of these single sentences--they are short, it doesn’t take long.  Write on a google doc or in your journal. Some writers like to take one idea and write it many different ways using different words.  Choose your favorite sentence.  NOW try to say the same idea in only six words!  It’s helpful to return to the models if you are stuck--which of the published six word memoirs stood out to you, and why? How can you try to do the same with your sentence?

Once you have some to work with, begin revising and editing.  How can we improve the craft of 6-word memoirs by using punctuation and by cutting unnecessary words?  Return to the models- notice that many of them do not use I and cut other unnecessary words.  Pick one of your own memoirs and try to write it a few different ways.

Time to select a memoir and an image! The image should not take away from your memoir, but should compliment it.  Watch Christy Kingham's video "how to use google draw" video for help! *Be sure you add your first name to your image! (First initial of last name is fine too, if you'd like.) The name should be small and out of the way of the six word text.

Video: How to Use Google Draw 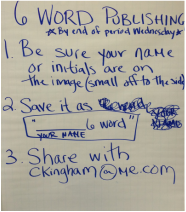